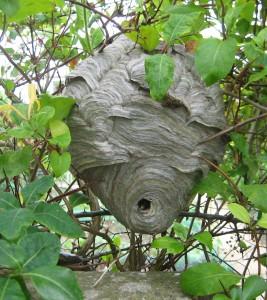 Many of our regular customers have been asking what has happened to the wasps this summer? Well without doubt the wet weather has had a significant effect on the number of calls we have had for help disposing of early stage wasps nests. Normally we are dealing with french wasps (dolichovespula media) also known as tree or median wasps. This species are the more aggressive and dangerous variety that nest in our trees hedges and bushes. Their season normally starts in early June and ends late August.  Without doubt they are there, and just because you havent had a chance to go in the garden and light the BBQ yet doesnt mean their not about. At some stage this summer you may get a chance to trim your hedge and this is when they are likely to catch you out. They usually build the nest within the hedge branches and are very hard to see with an untrained eye. Any vibration of the branches/nest will usually guarantee a very swift reaction as they believe they are under attack .We have seen some very nasty injuries caused by falls and multiple stings inflicted by this wasp where people are attacked hedge trimming. So beware….

Tip of the day – Before you start cutting the hedge grab a cup of coffee and relax  for a while and look out for any wasps flying to and from the hedge in any one area.

Tip 2  Do not attempt to destroy it yourself by hitting it, setting fire to them, or using any number of DIY chemicals available in the shops.

Tip 3 DIY Wasp nest destroyers never tell you how many times you are going to get stung whilst using their product (it effects sales!) None of them will kill a wasp fast enough to stop them stinging you first without the correct protective clothing .   Remember wasps can, and will sting you multiple times and usually wont stop until it is killed, it just isnt worth the trip to the hospital and many days of pain.